Only got four hours sleep again last night. God how I long for normal nine to five working life where I am guaranteed at least seven hours sleep a night. Did I just say that?

I hate to judge an entire country after a few short days but… the general consensus amongst the traveling community here is that the Israelis are rude (although some thought that maybe they don’t mean to be and it’s just ‘their way’). I haven’t seen too much that would make me dispute that. They never say stuff like excuse me or sorry and good customer service usually means maintaining a steady frown whilst be as unhelpful as possible.

The other thing the traveling community here seems to agree on is that the Israelis are lazy. I think that’s a pretty harsh thing to say about a whole country (based on hearsay) so I wouldn’t say I agree without spending more time here to decide for myself but I will tell you this story. Last night at the club I was ‘supervised’ by a thirty year old Israeli who watched us (a Kiwi, a South African and a Brit) sweep and wash the entire club whilst sitting next to a spare broom with his legs crossed. Occasionally he would say, “Sweep here.” Or “Sweep there.” As he put it to us “When I was twenty I worked with my hands, now I work with my head.” As I put it to him “You are the laziest fucking bastard I have ever met you could have gone home an hour ago if you had gotten off your stupid arse and helped out.” It didn’t go down too well.

Today I made what I consider to be my first steps on my journey home (London). I booked an Easyjet ticket from Athens to London on the 10th and jumped onto a train to Haifa where I caught a ferry to Cyprus. The customs check before boarding the ferry was the most thorough I have ever had. The x-ray guy made me move my pack so he could rescan it. The (cute) Israeli girl went to another room and came back snapping on a pair of rubber gloves. I must have gone all white or something because she quickly explained that it was for my pack. Greatly relieved I opened my pack so she could give it a full cavity check. And she checked everything right down to the opening all of the books to make sure that there was nothing suspicious in any of them. Then they had the cheek to charge me an additional fourteen dollars ‘security tax’ to pay for the privilege of being searched.

Met another great Canadian on the ferry. Dave is 28 and is on his first big tour oot of Canada. It turns oot that Dave’s social life has a couple of glaring omissions (topless beaches, squat toilets, drug experimentation) that has caused me to start calling him ‘Sheltered Dave’. 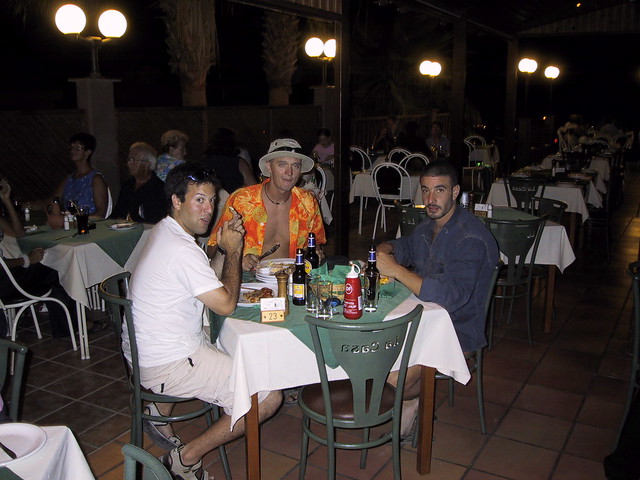 Also met an Argentinean called Daniel whom Dave and I have nicknamed monkey after the binobo monkey which conducts all of its social interactions with sex. Monkey who doesn’t speak a word of English and if he did he’d probably smack my lights out for calling him monkey. Spent the night at the bar drinking coffee and red wine whilst listening to the live band. Monkey sang the Spanish songs (mostly Ricky Martin) and I sang the rest. The guy in the band sang some of the songs but on the whole he just made moaning sounds that sounded like the real words. This was surprisingly effective (not to mention entertaining) and meant that his repertoire of songs was in the thousands. Additional entertainment was provided by Monkey loudly proclaiming “ai yai yai” at anything in a skirt that walked by.

I am sleeping on the cold metal deck of the boat to save money. For safety I stored my pack in the cabin that Sheltered Dave and monkey share with two orthodox Greek types. Whilst we were in the bar someone went to the trouble of trying to go through it. Nice.