Waking late I nearly missed the border closing for the second day in a row. My desire to put as many kilometres between the Evil Fins and myself provided me with all the motivation I needed. The border crossing between Jordan and Israel was relatively hassling free because nobody wants to go to Israel at the moment for some reason. There was quite a bit of sitting around though and it took over two hours in the end so I’m giving it a 4/10 on the howmuchofabitchwasthatborderometer.

Met a fascinating New Yorker called Rob. He is two thirds of the way through a three year world tour and was able to help me put New Zealand in perspective. New Zealand has four million people. New York has eight million. What we call a Prime Minister he calls a Mayor.

Have to remember to stop saying, “salaam” and “shocker run” and the other Arab words that I have picked up and used constantly for the last two and a half months. It’s much harder than it sounds. Fortunately on my modest budget almost all of the people I come into contact with in Israel are Palestinians (they’re also broke) so I hope they appreciate the effort. And get this not a single Palestinian I have met had been carrying a gun or has had a bomb strapped to them. Often you get a little speech about the conditions the in the occupied territories or behaviour of the Israelis. Everyone has I drum to beat I suppose. It just so happens that the Palestinians have rather a large drum. 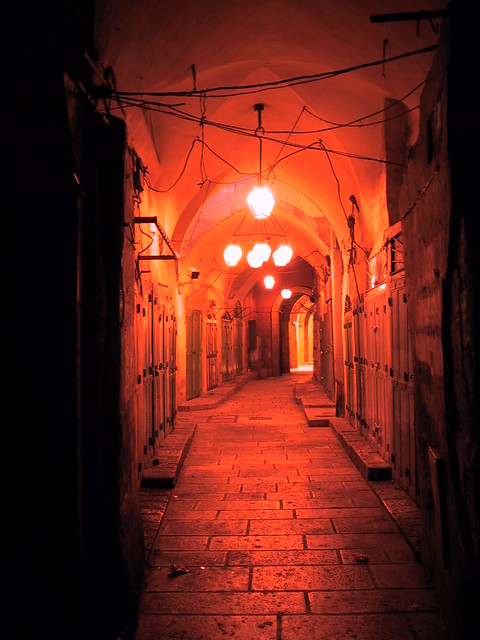 There are hardly any tourists here at the moment. Everyone except a few idiots have been scared off. My hostel has 25 people but this time last year they had 250 people. They had them sleeping everywhere from the kitchen to the shower stalls. The trouble must be costing the country millions of shekels every day. On the up side it’s an accommodation buyers market at the moment and hostel guy dropped the price before we could even offer him a lesser amount.

Oh yeah they call the money here shekels. When I toured Europe in 1999 I got tired of keeping up to date with all the different currencies in so I started calling everything shekels. I never realised that there was actually a country where the money was actually called shekels. I don’t expect anyone to find this amusing except me, but that’s okay.

I booked an expensive tour of a bunch of sights around Jerusalem, which started at 3am. I was pretty tired from living it up with the Evil Fins but I still only got to bed at midnight.